Parenting an Only Child: The Joys and Challenges of Raising Your One and Only
Susan Newman

Hidden Figures: The American Dream and the Untold Story of the Black Women Mathematicians Who Helped Win the Space Race
Margot Lee Shetterly 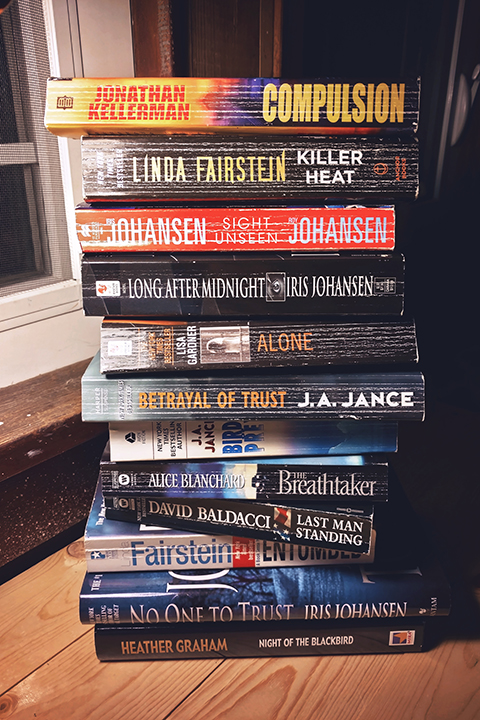 My bookstore gym haul from the other day :)

Nothing deep or obscure, but should be decent reading. But can anyone guess what's off about this photo?

Inside Out & Back Again Another bedtime story finished, and another one to read again when Lily is older.

This is the story of Hà, a refugee girl from Saigon, who flees with her mother and three brothers, at the end of the Vietnam war. She and her family end up in Alabama, where their otherness leads to hurt and frustration. But ultimately, Hà and her family find their place in their new world.

Hà's story is based on the author's own life and experiences as a young girl from Saigon. I found the book on a list of books that featured people of color, wanting to expose Lily to the various peoples and cultures that she's likely to meet here in this melting pot country.

This story gives us the opportunity to see our home through the eyes of a newcomer, which is so relevant right now... Thank you so much, Grimlock ♥ Vision! I was very surprised to find a dozen books :) Great picks - I can't wait to dive in! Our new bedtime story. It's told in poetry, rather than prose.

The Wonderful Wizard of Oz I'm not sure if I ever read this book before, but I bought it thanks to the unusual illustration style of Michael Sieben, thinking Lily would like it. We just finished it up as her bedtime story, though at 2.5 years old, she's short on attention, so we'll be reading it again when she's older and more appreciative :)

Agnes and the Hitman I needed this book.

"Take one food writer named Cranky Agnes, add a hitman named Shane, mix them together with a Southern mob wedding, a missing necklace, two annoyed flamingos, and a dog named Rhett and you've got a recipe for a sexy, hilarious novel about the disastrous side of true love…"

This book was hilarious (I literally did a spit take at one point) and very well-written. It's a good blend of heavy and light (contract hits and cooking, anyone?), that doesn't feel forced or implausible.

I feel like I'm hardly doing justice with this review, but I definitely recommend it, and will be buying my own copy!

I should be sleeping... But I can't put this book down yet.

Loving this so far! Makes me wanna cook more, and maybe adopt some kid named Garth to help fix up our acreage :)

I needed this after the last two!

Trickery (Curse of the MarySues)

*sigh* Where to begin with this disaster...

World building:
Dear authors, if your world uses the same damn measurements of time as we do, then for the love of all that is literary, use the same labels. Seconds, minutes, hours, days, weeks, months, years. I still don't know if clicks refers to seconds, minutes, or moments (or maybe all of the above, because that was how the term was used). Sun-cycle is clunky and unnecessary, especially if you use the term "day" at least once in the story. A life-cycle is not used to refer to a generation, but rather somehow a year. And I still don't know what a moon-cycle is, other than how others have referred to the menstruation cycle... could be a month. There's apparently no term for weeks, just mentions of "several dozen sun-cycles" rather than a couple or a few weeks.

So, yeah, made up terms for something already familiar to the reader is (again) clunky and unnecessary. Making up words does not make up for the minimal attempt that was made in world building. They had a good idea, with the rings, but it was never fully explained.

Coming back to add that I found the glossary, but it's before the first page, so Kindle doesn't (at least for me) show it when you start reading. Clicks are seconds, rotations (I think this was used once) are hours, and there is no term for week.

There are only two races: dwellers (the slaves, apparently) and the sols. Nothing to separate the two, other than the sols are apparently shiny, whereas the dwellers are dull. No backstory to that dynamic - it just simply is.

Characters:
Ugh, these two must have made it their goal to write the mostly stupidly offensive (or offensively stupid) "heroine" possible. The main character, Willa, is the epitome of 'Too Stupid to Live'. And apparently, she is really clumsy and has bad luck - how do I know? Because the authors made sure to mention it on nearly every single page (I wish this were an exaggeration - it is not). That's apparently the 'curse' in "Curse of the Gods".

She's nothing more than a Mary Sue, right down to the eyes that change color depending on the eye color of the person looking at her (seriously?!), who openly admits to being stupid and having a "minuscule little mind".

Emmy, her best friend. Doesn't really appear that much in the story, so she's just kinda tacked on to make sure Willa doesn't kill herself or anyone else with her stupidity in the beginning.

Plot:
It pretty much boils down to watching Willa make an idiot of herself. I don't want to give away anything (there's so little of it to begin with), but she gets mixed up in something that doesn't involve her, and she manages to get herself nearly killed a few times, and then somehow bound to the meatheads... sorry, the brothers.

The only true trickery here was using decent cover art to lure people into a terrible book. I will most definitely not be reading the rest of the series. Never before have I shaken a book or Kindle in such frustration.

It's like they've tried to write the most stupidly offensive "heroine" possible. And they can't keep her personality or knowledge consistent...

This book is seriously testing my patience. Already.

... to read fiction told in first or third person? Maybe it's because I've heard that it starts off great, but loses a lot of readers after a while, but I'm not hooked by this book, yet. Thirty-seven pages isn't a lot, I know, but usually by now, there's something established that keeps me wanting to read more. A book about demons living amongst humans - if you're a Supernatural fan, you'll probably like it.

The main character, Muse, is a "half-blood" - half human, half demon - with a touch of the TSTL. She's not a damsel in distress, so she's somewhat forgiven. She just tends to throw herself at the Prince of Greed, a full demon not known for his charity (as though any demon would be).

There's also a half-blood assassin, who, well, what I had here was kind of a spoiler, so I took it out.

It's the classic story of opposites attract, with some needless twisting, but overall, a pretty good read. It's not one I'm likely to read again, but I will check out the rest of the series.